There is always a unique amount of romance generated with the introduction of a piece of machinery from an Italian company. In the vast spectrum of automobiles, brands from Italy have almost always been supported by its own soul. As design, performance as well as driving dynamics has been found in near-perfect harmony among so many Ferraris and Lamborghinis, even smaller vehicles have proved worthy of similar charm. In the 1960s into the 1980s, a compact sports car from Fiat supplied motoring enthusiasts with a fun-loving Italian persona in what was an approaching dark age of the automobile. Affordable and economical, the original Fiat 124 Spider provided a guilt-free enjoyment in an era where primitive technology caused a deep drop in driveability with other 1970s vehicles.

The automobile has made a magnificent recovery from a sad time but the driving public still remains captivated by small, accessible roadsters. Emerging at the 2015 Los Angeles Auto Show as a reincarnation of the original vehicle’s spirit, the Fiat 124 Spider returns. The 2017 Fiat 124 Spider will initially be sold in two trim levels. The Classica serves as a base model of the 124 Spider while the Lusso is outfitted as a premium-equipped version. An Abarth version of the sports car is expected to be introduced at a later date. 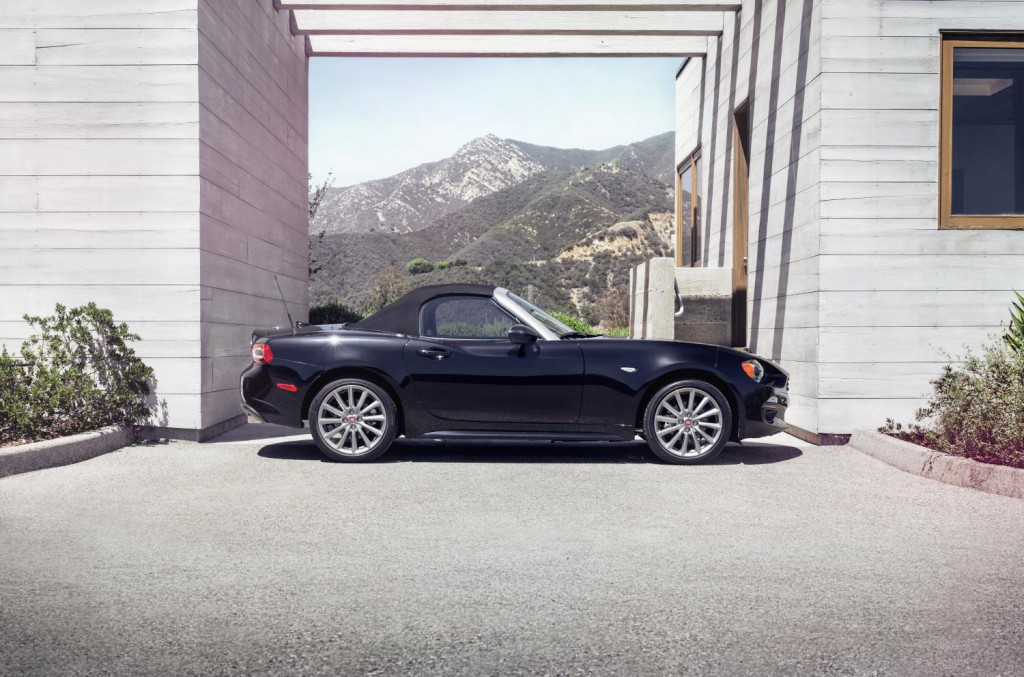 Recreating the 124 Spider for the 21st century, Fiat Chrysler Automobiles partnered with a Japanese company that has also proven skilled in long-term production of a small sports car. Mazda’s all-new MX-5 convertible was developed jointly with the 2017 Fiat 124 Spider. Sharing a rear-wheel drivetrain and other features, the 124 Spider is defined by its own overall design and power.

The 2017 Fiat 124 Spider’s exterior bares an intentional resemblance to the original Pininfarina designed sport roadster. The modern Centro Stile-sclupted sports car appearance illustrates past glory as well as modern Italian design. The front headlights and grille positioning of the new 124 Spider are reminiscent touches fans of the past compact roadster would identify. LEDs are used to project illumination from the headlamps as the Lusso version of the 124 Spider. The tail section of the 2017 Fiat 124 Spider’s body wears taillights featuring body-color matching inserts dissented from the styling of the current Fiat 500. 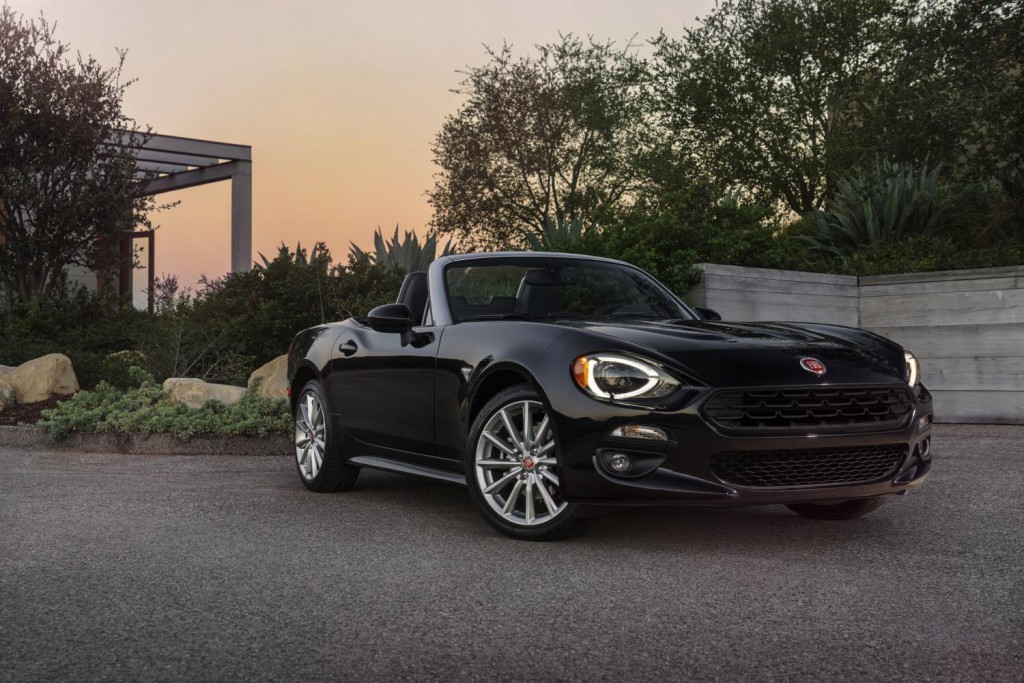 Providing a cozy place for a driver and passenger, the interior of the 2017 Fiat 124 Spider surrounds passengers with premium soft-touch materials. The steering wheel as well as the shifter knob is wrapped with leather on the roadster dedicated to feel of sport and luxury. The 124 Spider’s instrument and control are simple as well as predictable insuring to not overwhelm the user. Heated leather-trimmed seats and a seven-inch touchscreen serving as the centerpiece for a Fiat Connect 7.0 multimedia system is standard on the Fiat 124 Spider Lusso. 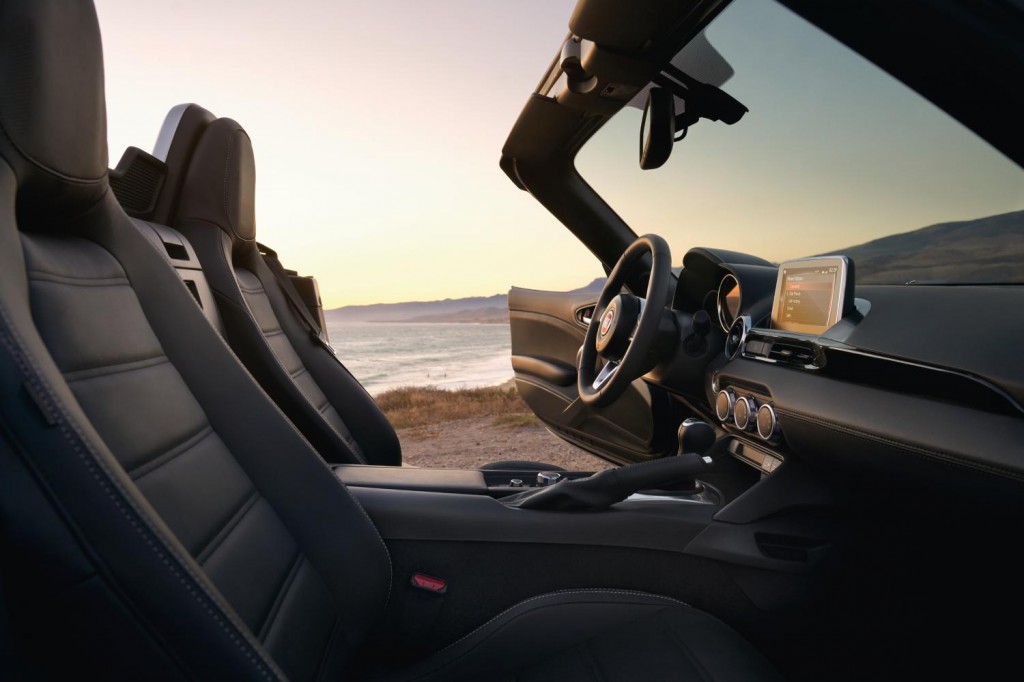 Smaller in displacement compared to the Mazda MX-5’s 2.0-liter SkyActiv powerplant, the turbocharger connected to the 124 Spider’s MultiAir engine allows the Fiat roadster to experience higher output. 160 horsepower and 184 pound-feet of torque should make the Italian sports car a spunky performer. Six-speed manual and six-speed automatic transmission will be offered allowing the owner to pick what kind of roadster driving experience they want. Electric power steering, electronic locking differential and four-wheel anti-lock disc braking provides the driver with all the tools needed to master the turbocharged 124 Spider.

The 2017 Fiat 124 Spider will be made available to the North American driving public in time for summer of 2016. The first 124 examples of the new sports car will be sold Prima Edizione Lusso models are offered in an exclusive blue-shaded Azzurro Italia paint scheme and fitted with a commemorative badge.

Check out some cool custom Fiats on CHARIOTZ.