During the 1990s and 2000s, the Honda Civic Coupe soared to popularity in sport compact tuner culture. Its abundance, low-price and VTEC engine power was to a generation of modern gearheads what the 1920s or 1930s Ford coupes were decades ago. As the underground phenomenon grew into a mainstream sensation, it seemed Honda was not entirely prepared to accept their little economy car. The company seemed to have feared the image of the Civic being associated as a performance car since it will affect the average driving consumer. The introduction of a MacPherson Strut front suspension on the seventh-generation Honda Civic debuting in 2001 was to the chagrin of many sport compact enthusiasts.

For 2016, Honda is looking to cure recent blahs to the Civic line-up. After a ninth-generation model earning controversy for highly conservative styling and lacking modern technology other lead rivals have in the compact car segment, the unveiling of the tenth-generation Honda Civic Sedan a few months ago was a sign the legendary value leader has raised its game. At the 2015 Los Angeles Auto Show, the two-door companion to the Civic Sedan seeks to elevate the level of excitement around the compact Honda brand. 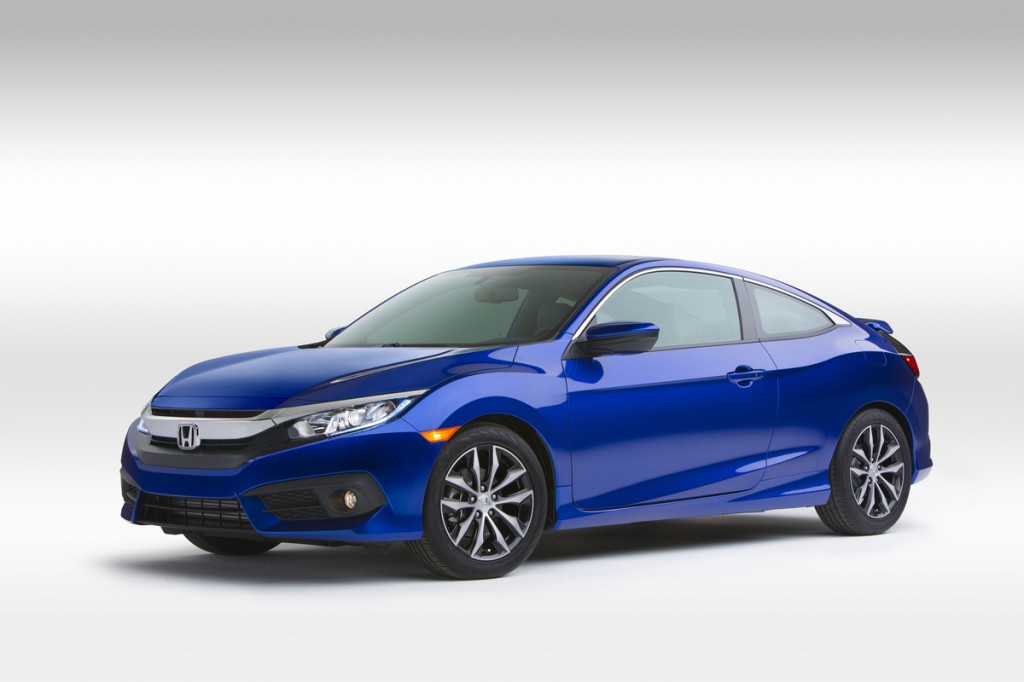 The 10th generation Honda Civic Coupe’s design mirrors the execution shown with the 2016 sedan. Wider and lower than the profile of the previous Civic, the 2016 Honda Civic Coupe immediately features a decisively sporty shape as standard equipment. The front end features a wing-like detail connecting each corner running above the headlights. LED daytime running lights are included on all 2016 Civic Coupes. The 2016 Civic Coupe conforms to a smaller overall shape than the sedan and employs unique bodywork sculpted to form a fastback-like appearance. The steeply-arced roof flows towards an invoking rear end. C-shaped LED taillights are specially configured on the coupe integrate into each other along the top of the deck lid. The lower portion of the rear fascia is styled with a racy intent. 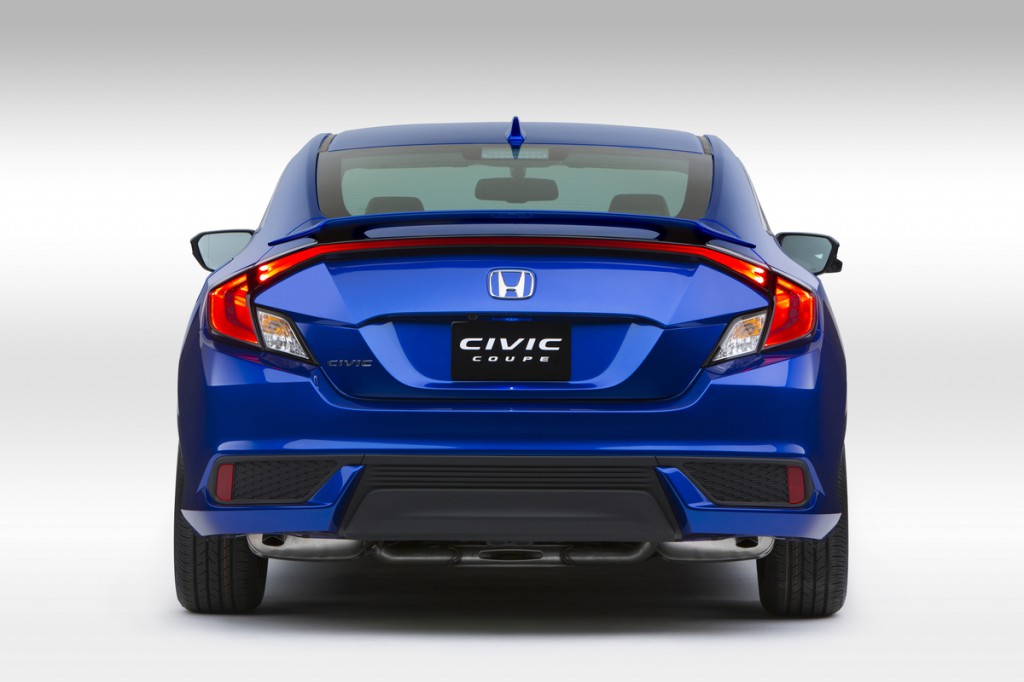 Sharply styled on the outside, the tenth generation Honda Civic Coupe explores a new sense of quality and comfort. Unlike many compact sports cars content with being essentially a 2+2 passenger vehicle, the 2016 Honda Civic Coupe happily promotes its rear seating capacity. Compared to the outgoing Civic Coupe, the 2016 model adds more than five inches of rear legroom. The two-tier instrument panel design used in the previous generation vehicle is replaced with a single instrument panel. On EX or above trim levels, a full-color TFT center meter provides an additional level of feedback and controls to the driver of the 2016 Honda Civic Coupe. Improved technology integration is delivered to the new two-door Civic with an available Android OS-supported Display Audio touch screen compatible with both Android Auto and Apple CarPlay. High-tech safety is also offered on the 2016 Civic Coupe through optional Honda Sensing. 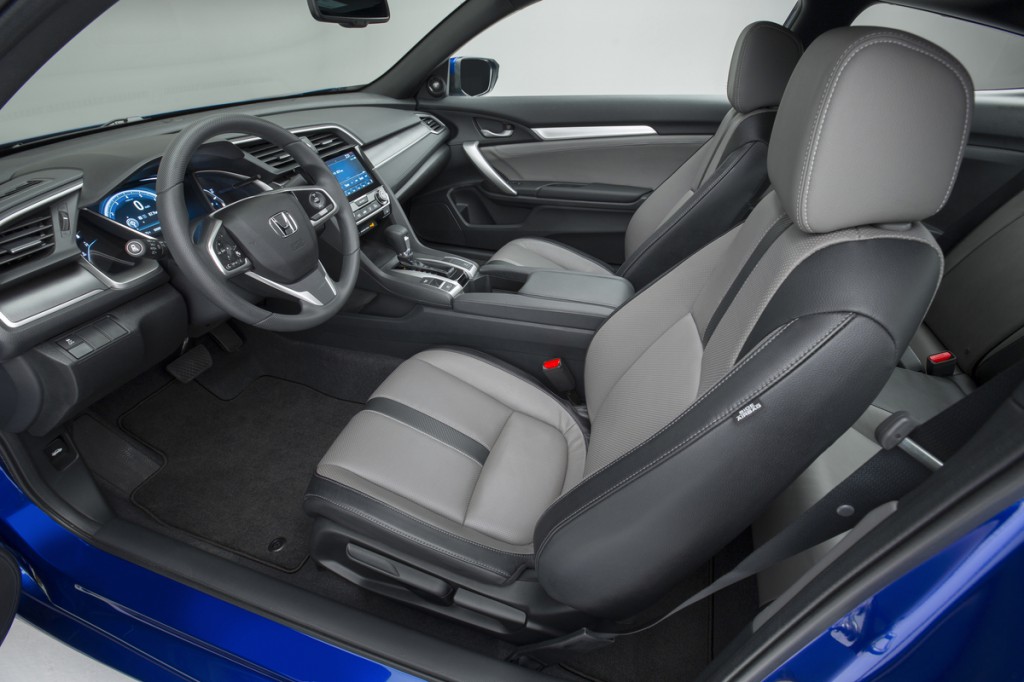 Combining with the new, dynamic coupe shape, engine power for the 2016 model year Honda compact delivers greater performance potential on several fronts. Partly thanks to direct injection incorporated with i-VTEC engines, horsepower, torque and fuel economy rate high on the 2016 Honda Civic Coupe. The base engine for the Civic Coupe is armed with a 2.0-liter engine generating 158 horsepower and 138 pound-feet of torque. Producing 174 horsepower and 162 pound-feet of torque is the two-door Honda Civic’s first-ever turbocharged engine. Installed on higher levels of the 2016 Honda Civic Coupe, the more potent turbocharged engine will provide similar overall fuel economy as the base engine (averaging at 35 miles per gallon). Performance fans looking for greater power output from the Civic Coupe will possibly have to wait to the arrival of the Si. A continuously variable transmission and a six-speed manual gearbox are matched with the power units of the new Civic Coupe.

The 2016 Honda Civic Coupe is expected to appear in dealership showrooms in March of the new year. Having now taken the wraps off the Honda Civic Sedan and Civic Coupe, there still remains high-level intrigue around the compact car. The tenth generation of the Civic line-up in the United States pledges to be one of the most diverse. Introduced over a 18-month time period, the new generation Honda Civic range will include a five-door hatchback model. Many sport compact fans will be awaiting the next Civic Si as well as Honda’s promised Civic Type-R’s arrival in the United States. A counterattack to the 2017 Ford Focus RS, the Honda Civic Type-R is expected to be propelled by an engine producing more than 300 horsepower.

Check out some cool custom Hondas on CHARIOTZ.

Check out our favorite cars from the LA Auto Show HERE.